Android Screen Recorder – How to Record Screen on Your Android Phone?

Recording screen on Android phone could be a difficult-to-deal-with thing, even with an awesome screen tool. To make sure the recording process go smooth, before you start to record, you should take your time to prepare– to spend few minutes writing a simple script as a cue for recording practice. Keep practicing until you’re familiar and comfortable with the process, then hit on the “Record” button for your Android phone screen recording tour.

Rec. is an Android screen recording app with a friendly interface. You can download it on Google Play, given that there are some apps’ names are similar to “Rec.”, you should pay more attention to the name when you search the app.

Once you tap on “Record”, the app will start counting up to 10, rendering you enough time to prepare before your Android device begins to record. You’re allowed to stop recording any time by tapping on “Stop” in the app, or simply turning your device screen off. There is a free version for you to try out, yet it limits your recording to merely 5 minutes and the audio recording inside only lasts 30 seconds. If you want to get more, the only workaround is upgrading it to the paid version. 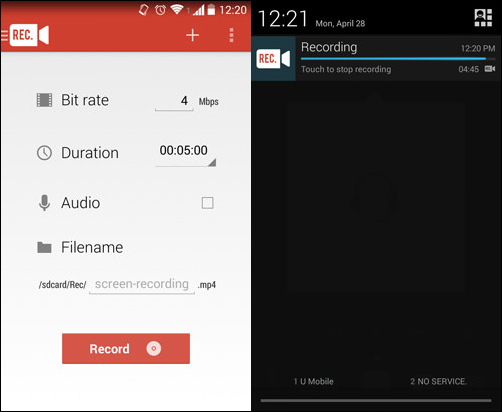 SCR Screen Recorder is one of the better all around screen recording apps on Android, offering front camera integration that is an indicator to show where you’re touching the display, and granting you the ability to choose your audio source and even mute the clip for recording audio later.

Finally you’ll get a polished, professional-looking clip. SCR Screen Recorder is free to record up to 3 minutes, with an additional watermark on your video. The app doesn’t have a main interface like Rec. instead it is sort of a small rectangular box comprising 3 buttons– respectively recording, settings and exit. 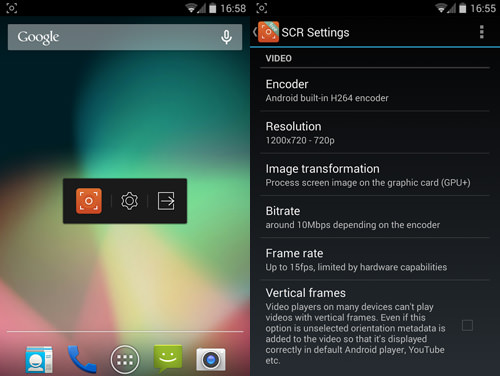 Both the two apps needs you to have a rooted Android phone, you should think twice about it before you root your device in case that it becomes a brick phone. Actually there are few apps without requiring you to root, the one know is AZ Screen Recorder that claims “no root” yet requires Android 5.0 and up, you might give it a shot. If you are an iPhone user and want to capture what’s on your iPhone screen, you can find iPhone screen recorders here.