Many times, you try to play some of the larger memory-consuming Android games on your phone, but suddenly find that your phone is overheating or cannot run the game you want properly, and has to pause or wait for it to recover. For a game enthusiast, this is very maddening!

Luckily, there are some ways and software that allow you to run Android apps on PC and MaC, and in this article, I will explain the 7 best ways to play Android games on PC whether by installing a virtual Android system on PC or by using one of the Android emulators available.

Also Read: How to Play PS4 Games on Any Android Phone with Ease

The first method we are going to talk about is installing a virtual Android system on your Windows or macOS PC. You may want to know that these virtual Android systems are developed to help developers testing their Android Apps before publishing it on Google Play Store, but luckily, it runs Android games properly, and some of them even run high-end Android games like PUBG or the Call of Duty for Mobile.

GenyMotion is a software that allows you to run Android system on your PC by using your virtual machine-like Oracle VirtualBox or VMware, or by downloading the full bundle of GenyMotion that contains a VirtualBox already.

The best thing of GenyMotion is that it’s available on Windows, macOS and Linux operating systems, so you will be able to run and play Android games on PC whatever the operating system you are using.

GenyMotion is a free software with some in-app purchases, it’s made for developers but allows you to use an Android system on your PC.

Moreover, GenyMotion’s best feature is that it’s available also for PC and the cloud, which means that you will be able to play AAA Android games even if you don’t have a high-end PC by playing over the network via the internet browser like Google Chrome or Mozilla Firefox. 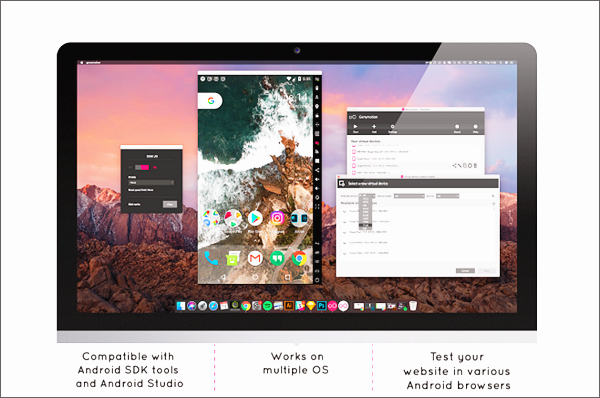 This is an unofficial tool that allows you to run the Android system on devices powered by AMD and Intel x86 processors instead of having to run them on ARM chips that can be founded on smartphones.

You will have to allow Android-x86 to install applications from Unknown sources as it doesn’t have access to Google Play Store, so you can install your applications and games by using APK files.

Also, you can run Android-x86 inside a virtual machine like VirtualBox, but make sure of enabling either VT-x or AMD-V in your host operating system’s BIOS to be able to run this version of Android over the VirtualBox software.

By default, you will find applications like Alarm Clock, Calendar, Browser, Camera, Email and others installed on your Android virtual system, and you can install your applications either by enabling Unknown Sources as mentioned before or by using AndAppStore client that contains a huge library of Android Apps. 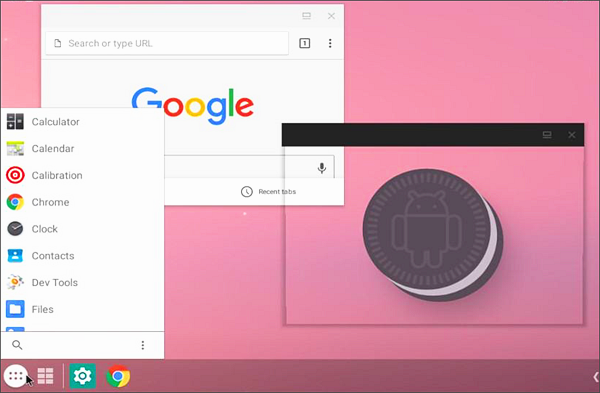 Also Read: How to Disable Notifications While Playing Games on Android

The second method to play Android Games on your PC is using one of the emulators we are going to recommend.

First, you need to know the difference between an Emulator and a Virtual Machine, as the first one only emulates hardware without relying on the CPU running your PC. On the other hand, Virtual Machines modifies the system to allow it to run on your CPU and its architecture like changing the architecture of Android system from ARM to AMD and Intel x86 as we have seen on Android-x86 software.

This is the default and official development console for Android and it’s developed by Google. It comes with many tools that help developers to run and test their Android Apps before proposing it to Google Play Store, but it also allows you to deal with your games as if you were a developer.

The weak point of Android Studio’s Emulator is that its installation takes more time than the others and it’s not recommended for consumer level, but I put it here as it still allows you to play your games for free and without Ads nor in-App purchases. 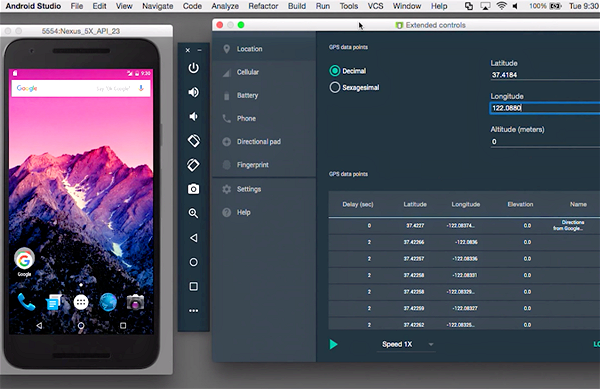 Nox App Player is one of the best Android emulators for PC that help you run your games easily and with some features that you might find in any other software like Screen Recording.

All you have to do to use Nox App Player is to download, install and run it, and you will be ready to play Android Games on PC for free.

It has a simple and easy-to-handle user interface along with some buttons distributed over its window to provide you with a touchscreen-like experience.

And it also has a Keyboard Mapping that helps you improve the performance of high-end games.

After installing Nox App Player, you will first need to enable root on it by heading into the Settings and select On from the drop-down menu. Once you perform the previous steps, restart the application, drag your APKs from the desktop into its screen and start playing.

Moreover, Nox App Player is available for both Windows OS and macOS so you can use it whatever the operating system you are running your PC on. 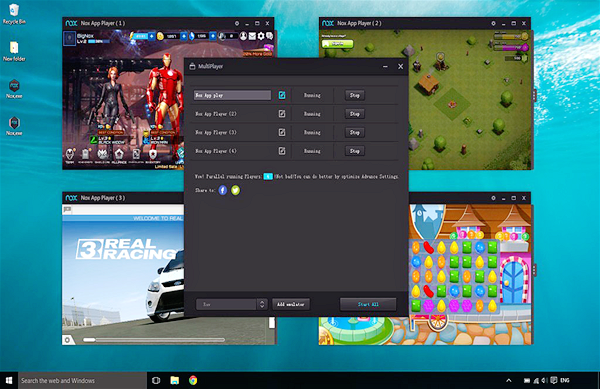 AMIDuOS is a simple application that allows you to play both Android games and FireOS games by downloading and installing the games you want via the Amazon App Store and Google Play Store.

The application offers you the gaps packages for Android 4.4.2 Jellybean, Android 5.0.1 Lollipop and Android 5.1.1 Lollipop, you can install the version you want based on the version of AMIDuOS you do have, and once downloaded and installed you will be able to download and install Apps from Google Play Store directly.

You can also get the root access to your Android OS on AMIDuOS by going to Settings, AMIDuOS Configuration Tools, and check the box next to RootMode, so you will have all the permissions to install and uninstall what you want. 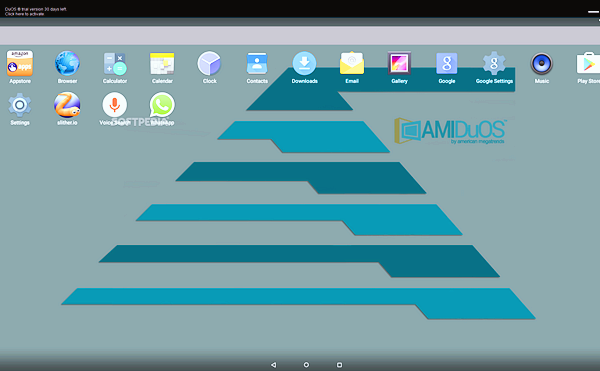 We can’t write about emulating Android OS or playing Android Games on PC without mentioning the most popular emulation software in the world, BlueStacks.

BlueStacks does not emulate the complete Android OS experience, but it’s almost the easiest and one of the best solutions to run Android Apps on PC and Mac too.

The best part of BlueStacks is that it allows you to directly sync your phone’s Apps and games without having to download them manually, and you can even sync photos, text messages, settings and more from your phone to BlueStacks.

BlueStacks has the best and the simplest user interface among the other applications, with the ability to use your laptop’s touch screen to control it, and it has a stretch and fit to screen function that makes your laptop works like a Kindle.

Syncing your phone with your PC via BlueStacks will help you not having to hold your phone every time you receive a message as it will be shown directly on your PC specifically on BlueStacks window.

And above that all, it also allows you to install applications from outside your phone which means that you have much more options for games and Apps. 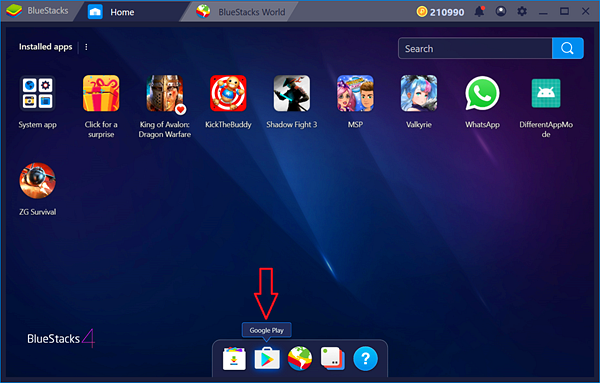 Remix OS Player was a truly new player on the field that allowed you to emulate Android 6.0 Marshmallow on your PC.

It’s developed by Jide and it has a very simple installation process which makes its one of the best Android Emulators for consumers and gamers who are not keen on developing Android Apps and games.

Unfortunately, Remix OS Player is no more supported as the company that developed it has turned from ordinary users to enterprises, but you can still download an old version of it and have some good time via SOURCEFORGE. 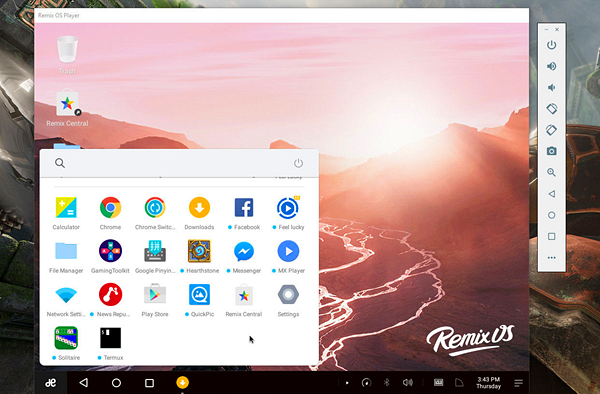 By reaching this line, you now have the best and the most trusted methods to play Android Games on PC for free either by using Android Virtual Machine or by downloading and installing one of the Android emulators I have shown you above.

The best part of having your Android games on PC is that you can play with the full keyboard of your laptop and even can use a joystick, which will help you rank between your friends and family whom you should share this article with them to play together on your PCs.

If you are searching for a method to root your phone to recover some data that you have lost due to wrong formatting your phone or an error happened while installing a custom ROM or any other reason, I advise you to stop looking for that.

As now, and with Gihosoft Free Android Data Recovery software, you will be able to recover any type of data without rooting your phone or paying a penny. 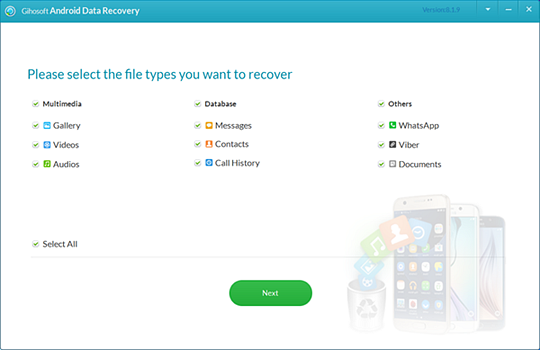 Whether you are looking for your photos, videos, call logs, contacts or WhatsApp Messages, I recommend you using Gihosoft Free Android Data Recovery, which will help you recover all your lost data just be connecting your phone to your PC via USB within minutes.