Text to Speech Apps are now must-have application on your phone, whether you are one of 20% of Americans who are suffering from a learning disorder, or you simply have a tiny screen on your phone which makes reading written content a hard thing.

Why Do You Need a Text to Speech App?

If you have a kid and you want him to learn stories which are written-only not in form of comics, you will then have to download a text to voice application for him so he can hear what’s written and get the best benefits of the stories you provide him with.

And if you are an athlete who loves to walk or run on the morning while checking the news from all over the world, the worst thing to do is to hold your phone and read while practicing, the only solution, in this case, is by listening to the news instead of reading it.

Luckily, Google Play store contains a huge number of Android Text to Speech Apps that you may get to listen to what you need whenever and wherever you need without having to put your eyes on your phone all the time.

In this article, I’m going to make it a little confusing for you to select the best one for yourself based on your preferences among from the following list.

The first option in today’s list is a full package of text to speech converters, including a web-based tool and an Android application that you can download from the store.

With TTSReader you will be able to convert any text to voice and control the speed of reading.

Moreover, you will be able to select the reader based on your preferences whether it will be a female or male, along with its support to more than 20 languages, and all for free.

The worst thing about Text to Speech Reader is the Ads that fills the website which you can easily get rid of by subscribing in the service.

Also, TTSReader offers you a recording tool to record the generated speech so you can hear it offline with a Google Chrome extension you may get from the store and start recording what you listen for. 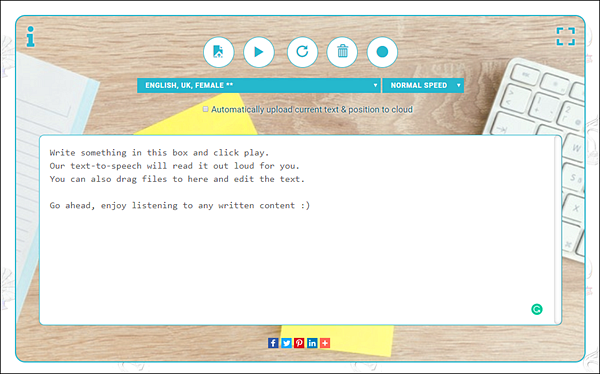 The best thing about Natural Reader is the interface it has, a simple and elegant interface with beautiful colors, and it’s a web-based service too with the ability to download a Chrome extension that will allow you to listen to whatever the text you want for free through a huge library of free and premium voices.

Also, you can get a software of Natural Reader that allows you to use it directly on your Mac so you don’t have to open the website or even the browser.

This text to speech converter offers you only the English language reading for free, and you can get more languages and voices after upgrading your account to premium.

The web-based interface allows you to paste the text you want to listen to or by easily uploading a document and even images as it can recognize the text on these images and then read it loudly. 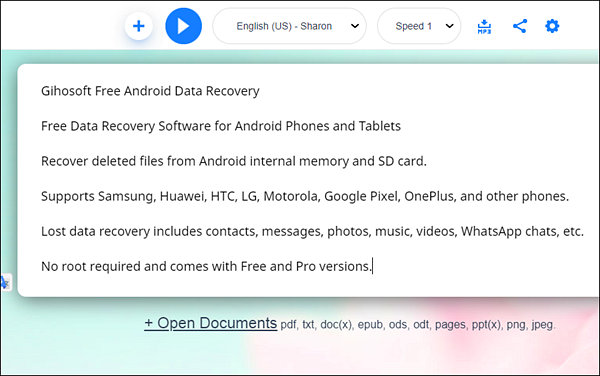 Another web-based tool that allows you to listen to all the text you want with multiple voices support that can read on American and British English, Portuguese, German, Spanish, Italian, French and Japanese languages with many different accents for free.

All you have to do is to head into the website, paste your text and tap Speak so you get one of the best listening experiences at all. 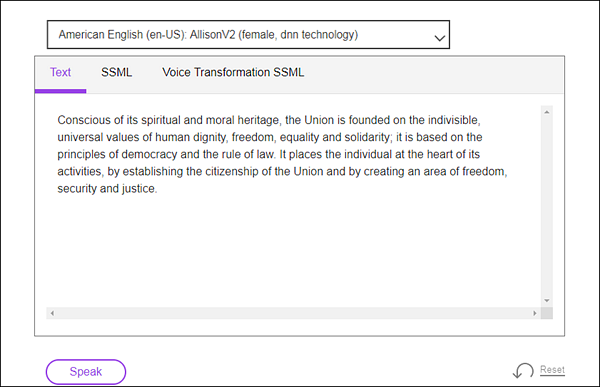 4. From Text to Speech

From Text to Speech is just another website that helps you listening to your text once you paste it with maximum of 50000 characters per one text.

You can listen to text in English, French, Russian, Italian, Portuguese, German and Spanish Languages by using one of the provided voices that reach up to 4 voices per language.

You can also select the speed of reading based on your preferences and the best thing about this text to voice app is that it allows you create and download the audio file after generating it so you can listen to it later offline via your music player on your phone.

Unlike the others, Narrator’s Voice is a text to speech Android application that lets you listen to whatever the text you want, convert it to an audio file, and share it with friends over social networks.

Narrator’s Voice also is very useful for YouTube channels and it can work offline after saving audios, along with its library of voices that contains Daniel UK, Microsoft’s Cortana, Pink Sheep, and others.

You can also customize the generated audio with many options and effects that make it funnier to prank your friends with. 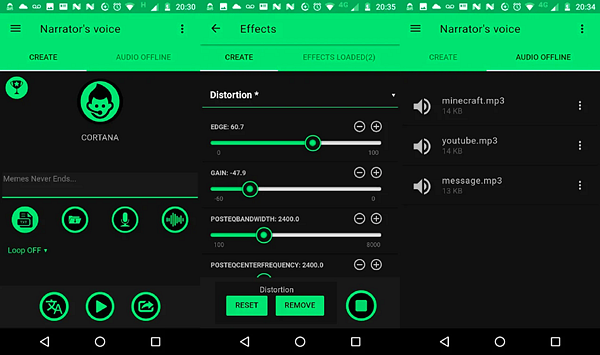 The best thing about Google Text-to-Speech is that it uses Google Translate service to speak translations loudly, along with the ability to offline download many languages and voices so you can use it anywhere and at any time to communicate with foreign people from other countries. 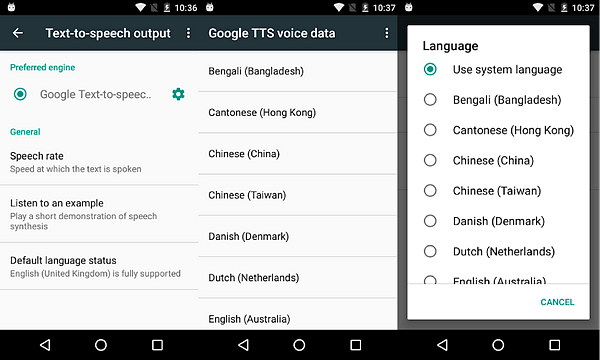 As usual, Amazon couldn’t leave Google to compete itself, and it has launched Amazon Polly as a part of Amazon Web Services (AWS).

You can use Amazon Polly text to voice app to listen to any text written in English, Portuguese, Danish, French, Japanese, Korean, Mandarin Chinese or Spanish languages and more with at least two voices available for every language.

Amazon Polly is a web-based service and not an application, but you can view and use it via the AWS Console App on Android after creating an Amazon Web Services account.

Developers can also use Amazon Polly to create applications that talk and integrate it with many speech-enabled products and devices, and it contains over 53 voices across more than 26 languages. 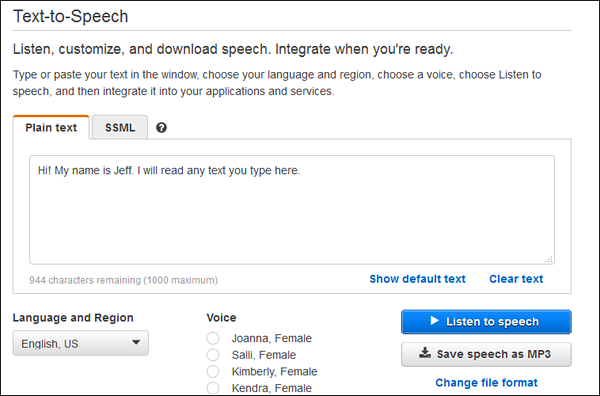 iSpeech is a web-based service with a Google Chrome extension that helps you listening to your texts in many different languages up to 27 languages through a male or female voice.

You can adjust the reading speed from Slow to Fast, and you can use it by pasting the text or by uploading e-books and PDFs to convert them all to speech.

Also, iSpeech text to speech converter allows you to download the audio files generated through it in many different formats for offline use and later listening like WAV, MP3, OGG, WMA, MP4, and others.

Developers can use the available SDK to include a text to speech service in their applications whether they are developing Android or iOS applications and more. 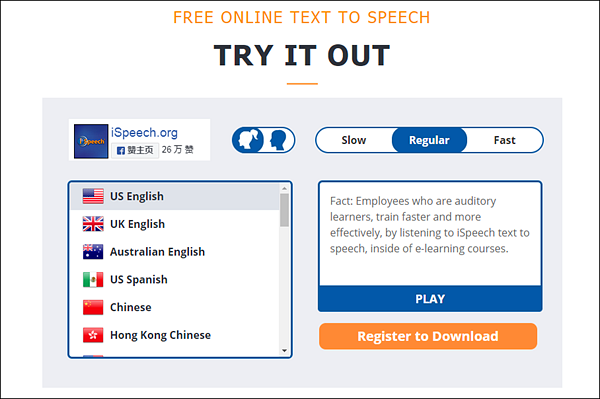 I consider this to be one of the best text to speech web-based services as it contains a simple interface with a text box and some opines including voice, talking speech and the name of the generated audio file that you will be able to download for offline listening.

Unfortunately, the website has some disadvantages as it only supports three languages; English, Spanish and Dutch, along with some Ads on the right side of it, and a maximum number of characters that limits you to 4000 characters per text, but it’s useful when you explore it via mobile phone as it doesn’t consume too much data. 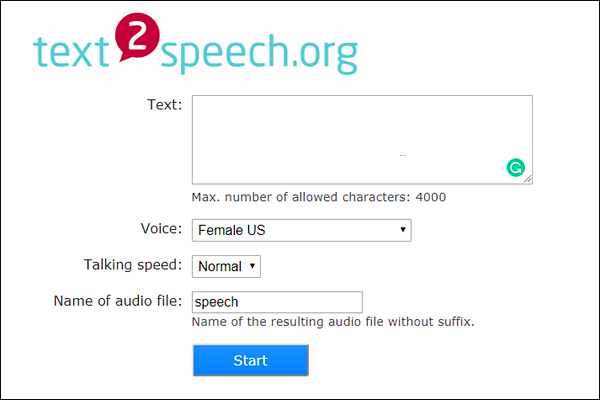 The latest text to voice converter in today’s article is Talk Free, a simple application that allows you to convert any text to speech, read web pages, export audio as a WAV file, and it supports many languages.

The application uses the interface of a music player with the ability to play, pause and stop listening whenever you want with simple taps.

The worst thing about it is that it doesn’t support many offline languages which will make it harder to depend on it while traveling abroad and meeting foreign people. 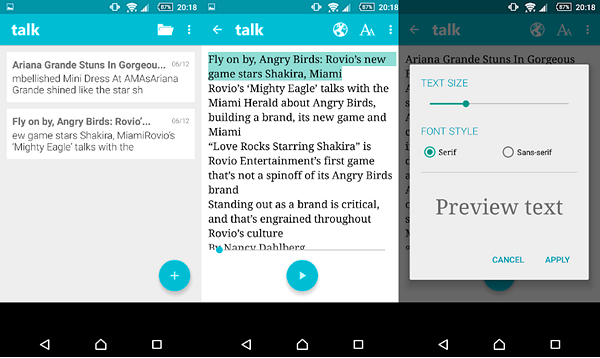 These were the best text to speech Apps and tools I have found on the internet; they all do the same functions with some options available on some of them but not available on the others.

Personally, I prefer using Google Text-to-Speech application if you are one of those who travels a lot, but the others will do the best if you are just want to listen to your text whenever needed.

If you have ever lost your files or suffering from losing some important data, I recommend you downloading Gihosoft Free Android Data Recovery software which will help you recover any type of data whenever you want regardless of the reason of losing them or the time.

Once you download the software on your PC and connect your phone, you will be able to preview your deleted files and select the files you want to recover even if they are WhatsApp Messages.