If you people are searching for the iOS emulators exclusively developed for non-iPhone users, then you are at the right place. Here we list 10 Best iPhone emulators that are compatible for PC, Mac and Android. If the PC or Android users want to run the applications which are developed for iPhone, then they can use these emulators to accomplish the task. These emulators are very popular among the users. For your convenience, we will divide this blog in to four main parts: 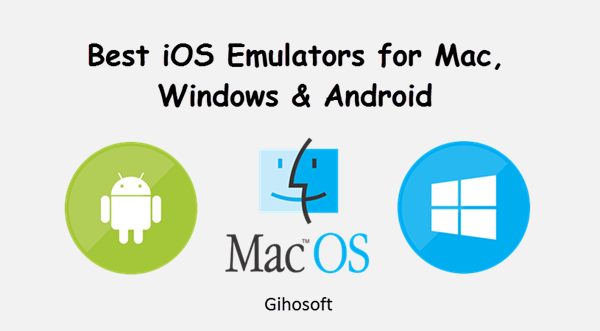 Bonus tips: If you ever lost any important note or message from iPhone, you can always use Gihosoft iPhone Data Recovery to get back the deleted data from iOS device easily even without backup.

You can have a look on the features and drawbacks of each emulator one by one in this list. Every emulator has an edge over one another and they are sorted as per their compatibility with Windows, Mac or Android based Operating System (OS). let’s get started with all the emulators one by one:

Many people, especially who don’t have an iPhone or iPad, are now searching for the iPhone emulators which are compatible with their Windows PC. These emulators have the ability to run iOS applications on the PC so that the users can enjoy those iOS games available only on the App Store without any iPhone. Not only the gaming applications, but you can also install and use other iOS applications on your PC as well.

These types of iPhone emulators are used to test and observe the behavior of a particular website or application on how they run on iOS. These tests are usually run online by developers regardless of what platform they use:

As we all know that Android users are the majority in the world of smartphone, therefore there are very limited iPhone emulators available for Mac. You can have a look on the top three of them below:

Though the Android OS and iOS are the main competitors to each other in the market, there are some simulator for people to run iOS apps on their Android phones. Among them, the famous one are Appetize.io and Xamarin Testflight, which we’ve mentioned above, as well as an old yet popular one, iEMU. All the iOS applications could be tested on Android devices by using this iPhone emulator.

Emulators are widely used by software developers for testing applications on variety of operating systems and platforms. iPhone emulators are also built for that purpose, as well as offer the suitable gaming environment for general users. These above-listed iPhone emulators are top best and used by millions of users. Just in case, if you encounter any problem, then please let us know in the comments section so that we can resolve that problem as soon as we see that.