And finally, a new technology has been revealed, instead of the continuous increasing of the RAM, storage, cameras … etc. The two giants of technology; Samsung and Huawei have brought us a real new quantum leap in the field of smartphones with their foldable devices Samsung Galaxy Fold and Huawei Mate X.

We may agree or not that 2019 was not the proper year to show off and release this type of devices as they need more work to be done to provide a true foldable phone with the same or more features of the ordinary smartphone not less, but now, as we are here waiting for both of the devices to be available in the stores within few months, we have decided to help you dear readers in selecting your future foldable smartphone and provide you with the most accurate and neutral comparison between Samsung Galaxy Fold and Huawei Mate X.

In the next lines, we will have a deep look at both phones, starting from defining them in the next section, so keep up reading.

As I said before, this comparison is so neutral, so I’m not going to say the winner in any term, I will totally leave that for you to decide based on your preferences.

Based on the time of the announcement, we will start our today’s article by talking about Samsung Galaxy Fold, which was first appeared officially on February 21, 4 days before the announcement of Huawei Mate X.

Samsung folding phone first appeared during Samsung’s developers’ conference in November 2018 along with its new One UI and starting from this date, Google stated that it will work with OEMs to provide the proper support for foldable smartphones.

And finally, Samsung showed off its first ever foldable smartphone during Galaxy Unpacked event on February 21 with the slogan: 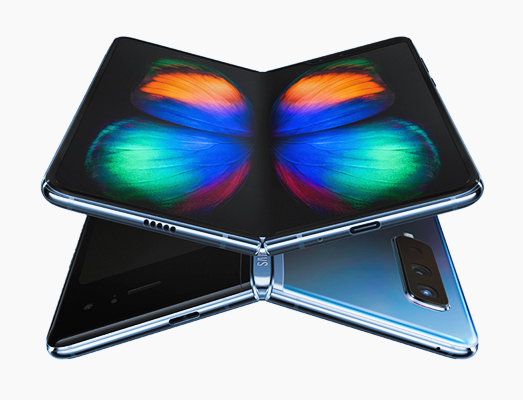 4 days later, the Chinese dragon Huawei released its foldable smartphone Huawei Mate X to join one of the greatest competitions ever with Samsung.

Unlike Samsung, Huawei was working silently on its foldable smartphone and we didn’t know anything about it before the day when a leaked photo of the banner they are going to use in their event was published to announce that Huawei is going to release Huawei Mate X as its first ever foldable smartphone with the slogan: 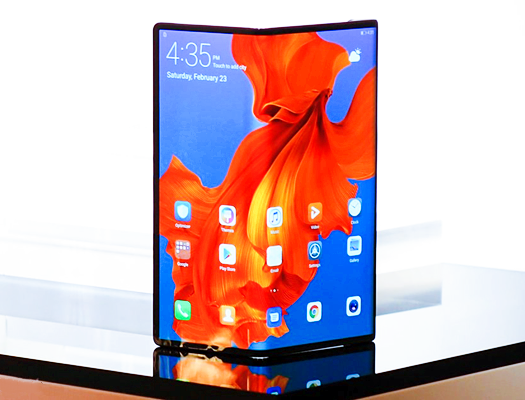 The most important factor of a new device based on its design is the design. If we look at Samsung Galaxy Fold, we can see a small old-fashioned smartphone with a small screen of 4.6-inch and huge bezels which doesn’t reflect the new followed policy of the smartphones that requires no bezels at all like what we have seen on other Samsung phones including Galaxy S10 that was launched on the same day of Galaxy Fold launch.

This tiny screen is considered to be the second or external screen of the phone and it’s an HD+ AMOLED screen and it has its own selfie camera which we will talk about later.

After unfolding Samsung Galaxy Fold, we will find the bigger and the main 7.3-inch QXGA+ screen of the phone and gets folded Inside the two halves.

On the other hand, we find Huawei Mate X, the phone who solved the problem of the tiny screen of Samsung within 4 days, as it has 3 positions of use with maybe what we call 3 screens.

With this way, Huawei has managed to solve the problem of Samsung’s tiny screen, with less or almost no bezels, just be inverting the side of folding and unfolding the phone.

Also, Huawei didn’t have to add a notch on the high part of the screen as Samsung, as they have added a side edge to the phone to contain the cameras which work as the rear and selfie cameras in the same time as we are going to see later. 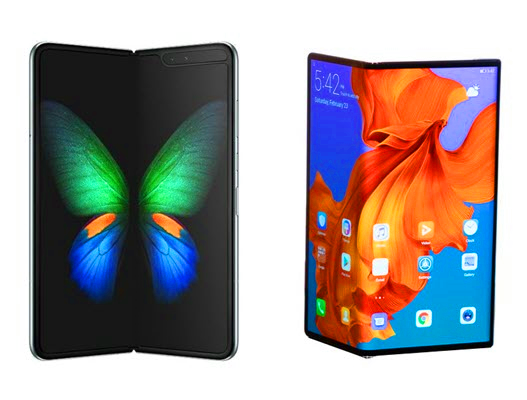 In this term, Samsung has added some value more than Huawei and this based on the benchmark of each chip on both devices.

Samsung Galaxy Fold has a Qualcomm Snapdragon 855 chipset with 12 GB of RAM which is more than any other available phone on the field on the real-time, along with a 512 GB of internal memory type UFS 3.0 which has a great and high speed of data reading and writing compared to the previous generations, but without the support for external SD cards.

On the other side, Huawei’s Mate X has a Kirin 980 chipset with 8 GB of RAM and 512 GB as an internal memory type UFS 2.1 supporting external Nano memory cards up to 256 GB.

In this term, we can see by only reading and doing a little dig on the internet about these specifications on both phones to find that Samsung has higher specifications more than Huawei.

In my opinion, a device with this huge size of the screen up to 8-inch would require a higher specification to be able to show and process all the required tasks smoothly so the end-user will be able to do what he could have done on a small smartphone with this big one.

Both devices come with Android 9.0 (Pie), but Samsung Galaxy Fold comes with One UI; the newest user interface of Samsung that was introduced to replace TouchWiz with more features that integrate with the multi-screen phone.

And Huawei Mate X comes with the latest user interface of Huawei; EMUI 9.1 which also integrates with the multi-screen phone.

Some could prefer EMUI with 2 Apps and others may don’t, this one is left for you to decide. 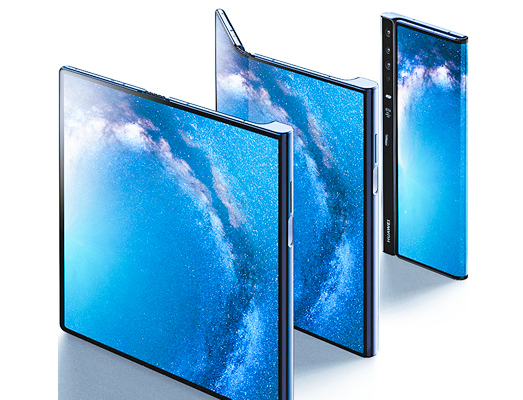 We haven’t tried the cameras of both of the phones yet, but we can expect what we are going to have based some previous experiences as Huawei and Samsung didn’t change the camera settings and both phones have Mate 20 Pro and Galaxy S10 Plus camera settings respectively.

Together have LED flash, can capture and record HDR and panorama photos and videos with 2160@30/60fps videos.

They are all powered by Leica optics, dual-LED dual-tone flash, and can capture and record as panorama and on HDR.

Also, they can record within 2160@30fps and 1080@30fps, but the most important thing which is the best thing of it is that you can use those three high-end rear cameras as selfie using the small 6.38-inch screen which assures having great selfie footages for yourself and your family.

When we come to the battery, we can’t find a great difference between Samsung Galaxy Fold and Huawei Mate X, as Galaxy Fold has a non-removable Li-Po 4380 mAh battery with a fast battery charging function of 18W.

Huawei Mate X has a non-removable Li-Po 4500 mAh battery, but Huawei certainly is the winner in this term as they provide you with a charger that can charge with 55W along with Huawei’s SuperCharge technology that charges your phone from 0% to 85% in 30 minutes only.

For someone who is looking forward to changing his phone, the first thing you will search for is the price, whenever you have more money, you will get a higher price phone, and vice-versa.

In this term, we can find that Samsung beats Huawei as they sell their foldable smartphone for about 2000 EUR compared to 2300 EUR for Huawei Mate X.

1.8 Conclusion – Which phone will you buy?

Yes, we have broken the limit of 2000 EUR for a smartphone with the foldable smartphones’ revolution. Personally, I see that the price is fair for a newborn technology like the old prices of the so-called “Stupid Phones” when they showed off for the first time.

But, do you really have to purchase any of these foldable smartphones right now or once they are available? I can’t answer this question, and if I say my opinion, I may not be fair at all.

And for the phones I reviewed above, you may select the proper one for you, but my real advice is to wait for sometime to give yourself more choices when more companies give what they have in this field, as when the competition increases, the prices decreases, and vice-versa.

Useful tip: Whether you are a Samsung or Huawei user, you will inevitably encounter data loss problems in the process of using mobile phones. Here I recommend a practical tool, that’s Gihosoft Free Android Data Recovery. It can restore any data lost due to accidental deletion, mobile phone restore factory settings, memory card formatting, system upgrade, and other reasons. With it, you are no longer afraid of data loss! Check how to recover deleted data from Samsung mobiles.