Home > Tips > How to Unblock Blocked Websites with 5 Methods 2019

How to Unblock Blocked Websites with 5 Methods 2019

In many cases, we see institutes, governments, and businesses involved in internet censorship. It is the suppression of what can be viewed or uploaded on the internet. Some governments do it so that it helps them with their propaganda. Some businesses do it to deny the general public of facts. 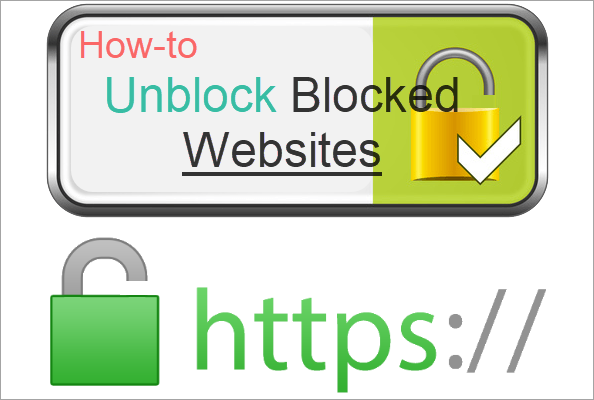 However, since physical authority cannot be put on all websites, some methods are used for censorship that is unique to the internet. Examples of some of these methods are content filtering and website blocking.
Governments, institutes or businesses usually do website filtering and blocking. Some countries filter potentially provoking content or sensitive content. It is very rare that an organization would have complete control over all the computers connected to the internet. Therefore, it is possible to unblock blocked websites and access the content that you need.

If you accidentally deleted a photo or video file downloaded from a blocked website and just want to recover it from your computer, it would be very convenient to get the file back with a free photo recovery software.

Common Ways that Websites Are Blocked

There are various ways in which internet censorship is carried on to block websites. A few of them are described down below:

5 Methods to Access Blocked Websites with or without Proxy

There are many ways one can access websites that are blocked in their country, region or institution. We have listed the most popular ways to deal with internet censorship.

A VPN extends a private network across a public network and allows users to access the internet freely. Benefits of VPN are security, functionality, and management. It started as a tool to help with corporate applications and resources. Security is ensured by private connection which is processed via encrypted layered tunneling protocol. Passwords and certificates are used for authentication purposes.

A proxy server is a server that acts as an intermediary. A user that connects to a server via a proxy website can gain access to blocked websites. It provides anonymity and can counter IP address blocking.

In an event where the server filters content based on the origin of the request, circumvention is possible using a proxy website. IP-based restrictions can be bypassed through a proxy server. Users can also circumvent proxies which filter using blacklists.

3) Unblock Blocked Websites with the Use of IP

Sometimes, institutions that block websites only block the URLs of the websites. So, one can use the IPs instead of the URLs to gain access to these sites in such events. IP address of any website can be discovered using the Command Prompt. All you need to do is to type “ping websitename.com” and the IP address of the target website will be shown on your screen. Then type that IP address in the address bar of your browser and hit go. The URL-blocked website should open successfully. However, it must be noted that sometimes IP addresses are blocked too. In those cases, using IPs instead of URLs won’t bear any fruit.

IP anonymizer like the Tor Browser can be used for maintaining anonymity and to bypass blocked websites. Tor Browser is very popular among privacy enthusiasts. It also allows access to the dark web websites.

There are many other ways to bypass blocked websites. The tools of fighting against internet censorship are rapidly evolving. Kindly share the methods that you like with us!