Top 10 American YouTubers Whom You Can Subscribe to in 2019 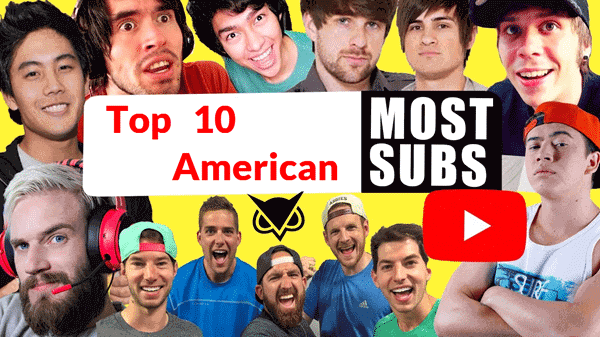 Streaming online videos especially on YouTube is probably the all-time favorite activity for all users. After the launch of YouTube on Google Play Store in 2005, it has made a tremendous popularity mark in just a few years after its official launch. Today we will mainly let you know the 10 most popular YouTubers in the USA. YouTube is just like a mini Google where you can find the answer to all your queries in video form.

YouTube is really an incredible platform where nowadays, live streaming is also possible. Any user can join online streaming where most of the big and popular YouTubers interact with their subscribers. Moreover, the recent launch of the feature of making offline video has boosted up the popularity of YouTube furthermore. When you want to download some interesting videos from YouTube, you can use the best 15 YouTube video downloaders for Windows and the top 15 YouTube downloaders for Mac OS X/macOS.

We think that all the above-mentioned facts have cleared all the things and facts about YouTube. And now it turns to the access to those videos which are the most popular. As we all know, YouTube contains a separate section where you can stream the most trending videos on YouTube. Of course you can also get them downloaded, and if you need to convert these downloaded videos then, you can use Gihosoft Free Video Converter which empowers you to convert videos to MP4, AVI, MKV, MOV and more at a blazing fast speed, so you can easily change video formats. But apart from that, there are some popular YouTubers of all-time especially from the United States of America (USA). Here, in this article, we will present a list of the top 10 YouTubers in America for you. You can subscribe to their channels to have an update whenever they upload or post their latest new video.

We don’t think that any YouTube enthusiasts haven’t heard the name of PewDiePie. He is the first of the top American YouTubers and he often uploads new videos on his official YouTube channel very frequently. This man is on the urge of getting a remarkable mark of 1 billion official subscribers on his YouTube channel. Every time a new video is uploaded on YouTube by PewDiePie, it gets in the list of trending videos. Basically, PewDiePie picks a current topic to shoot a video which includes funny facts and comedy content pictorials in it. That’s why people, especially from the United States love to watch the videos uploaded by him. You can also watch the videos present on the official channel of PewDiePie if you are an online gamer enthusiast and entertainment lover.

This American YouTuber is another very creative guy who shoots the most entertaining videos and uploads them on its official YouTube channel. Dude Perfect YouTube channel is on the urge of crossing the mark of 50 million subscribers and we think that this number will keep increasing as far as the quality of the video is concerned. The most interesting part of videos uploaded by Dude Perfect is that every video contains a suspense part which will be continued in the next video. That’s why users are subscribing this YouTube channel very rapidly. Users are also giving a very positive node to this American YouTuber.

Smosh is another most popular YouTuber in the USA who is quite popular among people from all around the world. This American YouTuber is currently having almost 25 million YouTube subscribers and that is really a massive number in a very short time. In the early stages of its launch on YouTube, the videos uploaded on this channel are directed and produced by both Andrew Hecox and Daniel Padilla. But in June 2017, they both decided to split from each other. From there, the popularity graph of this channel lowered down. But still, we suggest you watch interesting videos which are based on real-life incidents, mobile applications, gaming fever, and other brand-specific merchandises. We really think that you will definitely love to watch the videos of this YouTube channel.

This American YouTuber is really a very good YouTuber for sure. The videos posted on this channel are really very interesting based on various and a wide category of topics. We don’t think that he has left any topic. For example, he frequently posts videos based on real-life incidents, comedy videos, gaming segment, trending topics, the latest releases of various electronic gadgets, and much more. With more than 20 million subscribers, Ryan Higa is currently on the 4th spot in the list of YouTubers from America. He is also popular with a short nickname of nigahiga among his subscribers.

Markiplier is one of the top YouTubers in America and he is really an awesome guy who is quite popular among American people. Markiplier is known for his funny and interesting comedy commentary made on various niches of gaming segment. He does live streaming on his channel where he interacts with his subscribers and does funny commentary while playing online games like PUBG, Fortnite, etc. Markiplier is currently having almost 21 million YouTube subscribers and ranking fifth in the list of great YouTubers from America.

Logan Paul Vlogs is another one of the top American YouTubers, and he posts really amazing videos based on trending Twitter tweets and other trending topics. But in the earlier stages when he launched his channel on YouTube, he posted really annoying and abusive content which violates the YouTube regulation and privacy policy. That’s why after being in controversy for a very long time, he finally decides to post videos based on different niches which will provide entertainment to the users. All the videos present on this channel are must watch videos and we too recommend you to subscribe to this channel.

This YouTube channel is basically operated by Fine Brothers Entertainment (FBE) Limited. This American media company is quite popular among users because of the entertaining videos which this American company regularly posts. This company has received various awards and prizes from various American organizations. Moreover, this channel frequently uploads new videos on its official YouTube channel which directly maintains the popularity stream among users. That’s why we strongly recommend our users to subscribe to this great American YouTube channel.

Liza Koshy is another very great YouTuber among the most popular YouTubers in the USA, and he regularly posts videos based on a variety of niches. If you love to watch live gaming streams, then this American YouTube channel will really help a lot. Liza has tied up with other YouTubers to stream a joint live stream where users can watch a variety of gaming thoughts and tricks. Apart from the live streaming, she also posts some of the most popular comedy and entertaining videos which users love the most. Overall, a combined spice of both comedy and gaming can be streamed on this great American YouTube channel.

With over 15 million YouTube subscribers, Roman Atwood Vlogs stands on the last spot of this list. But one thing which we can tell you is that there are many awesome contents available on this channel which you can browse in order to have a good dose of entertainment. He is a popular prankster as well as a good human. In early 2018, he decided to stop his Vlog updates on his channel and focus on different things which will help him a lot. We strongly recommend you to watch the available videos on his channel. We assure that you will definitely love it.