Are you browsing the internet through a public Wi-Fi? You’re setting yourself up for a hacking attack if you aren’t careful, a reason you may want to use a VPN.

It helps protect you and keep your browsing secure, a reason why VPNs have become one of the most applications on both computers and phones. VPNs give your device an extra layer of security. Most importantly, their URL shifting nature provides you content from all over the world, especially the kind that isn’t available in your region. Thus, you can watch sports, TV, visit geo-blocked websites, and do more. Therefore, VPNs are the most sought-after applications on the phone.

Though the good VPNs do require you to pay a fee, there are several that are available just for free. The following VPNs are your answer to your question of what is the best VPN for Android.

Hotspot Shield is one of the best free VPNs for Android. The app lets you choose from one of the 25 available countries if you pay for its elite version. In the free version, the app chooses a country for you but doesn’t compromise on the availability of content. You can protect up to 5 devices with its free plan. You also get up to 500 MB of data to view per day. Hotspot boasts of military-grade encryption and is very safe and easy to use. 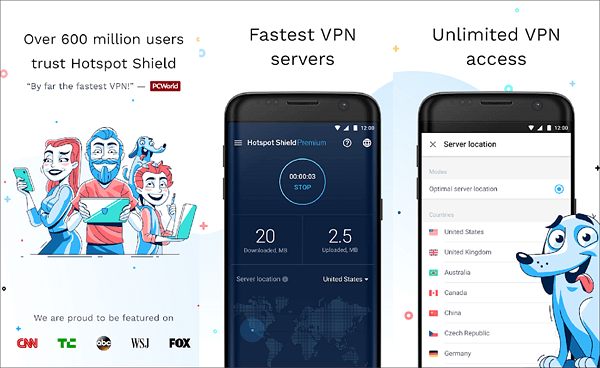 Windscribe is relatively new but one of the best VPN apps for Android. It allows a bandwidth of 10 GB per month. You get to choose from eight server locations and watch content that’s blocked in your region. It also doesn’t collect any user data and allows you to set up an account with just a username and a password. It doesn’t even store connection logs, IP stamps, or visited sites of the user. Apart from that, you can earn an extra 5 GB for tweeting about the server. If you invite a friend to join Windscribe, you earn 1 GB of data. The pro version of the app has 47 servers, an ad-blocker, and a firewall.

Owned by McAfee, TunnelBear is another free VPN app for Android. The app comes with free and paid versions. Unlike Hotspot Shield, you only get to use 500 MB of data per month. But TunnelBear is one of the most secure VPNs in the market. It doesn’t collect a lot of data on its users. Thus, only shopping and banking becomes a secure process. The paid version of the app has no limitations on the data, the number of countries available, and the connected devices. 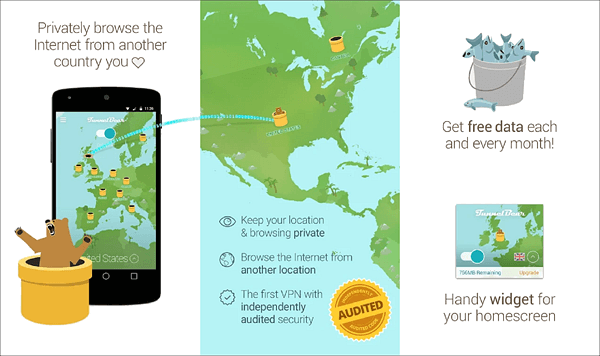 ProtonVPN is the best free unlimited VPN for Android. The app doesn’t impose any bandwidth restrictions in its free version. You can browse as much data as you want, but you only get it on one device. The other restrictions include three locations to choose from and a lower priority for speed. The app has no ads on it and allows you to sign up with your email address alone. 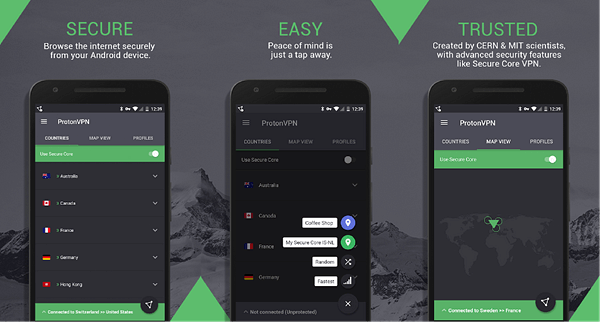 Speedify makes sure that your internet stays connected and fast through the worst of times. Thus, it connects itself to any available ethernet or 3G/4G connection to provide you the best speed possible. You can access all the servers of Speedify in the free version as well. The only limitation is in terms of data, which is 4GB for the first month and 1 GB for the subsequent ones. 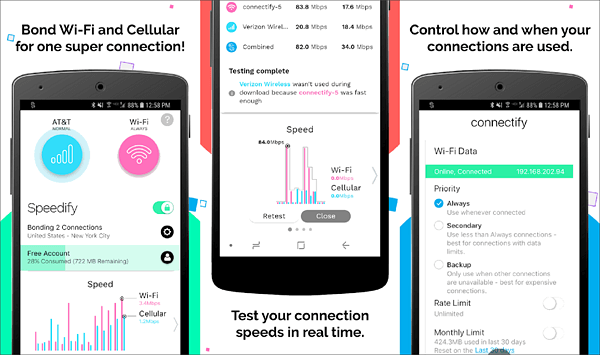 Hide.me allows you only 2 GB of bandwidth to use in its free versions. The free Android VPN is also limited to one device and provides only 3 locations for servers. However, hide.me doesn’t hamper the speed of your connection and doesn’t show any ads either. It doesn’t take any private data from its users and is thus, safe to use.

SurfEasy is a secure and free VPN for Android provided by Opera and comes integrated with the Opera browser. You can use up to 1000 servers from 25 countries and 5 devices on the free version of the app. However, the data limit is of 500 MB a month. It’s also difficult to connect to long-distance servers. However, if you’re using the VPN from the Opera browser, there are no data limitations. 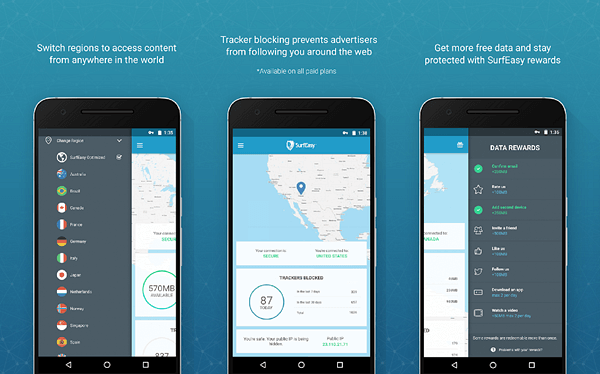 Unlike other best Android VPNs private tunnel doesn’t give free data to use every month. The app gives you 200 MB of non-expiring data that you can use for as long as you want. Once the data is finished, you can purchase it in bundles of 20 GB or 100 GB. You can also get a yearly subscription for unlimited data. You get 9 server locations to choose from to browse your content. A maximum of 3 devices that can share the VPN at any point. The app is straightforward to use but has a lot of performance issues. 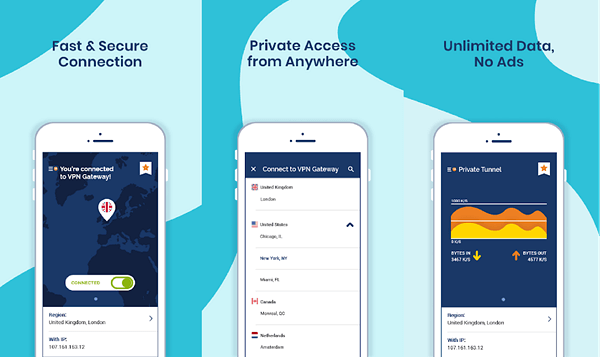 VyprVPN is a popular Android VPN in 2019. The app works without any 3rd party’s help and doesn’t hamper the internet speed. It has over 75 servers spread across the globe and has about 2 million IPs. The app gives 1 GB of data for its free users that doesn’t have an expiry date. You can connect up to 2 devices with a free connection and 5 with a paid one. 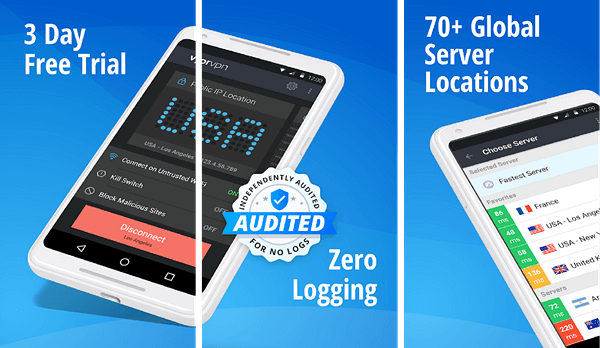 Turbo VPN starts working with just one tap on your phone. The cloud proxy servers are from several countries and can be used to watch any content not available in your country. Apart from that, the app can also unblock video content in the country. It encrypts all the user data and allows private browsing. The app also supports all sorts of data carriers and doesn’t hamper the speed of your browsing session. 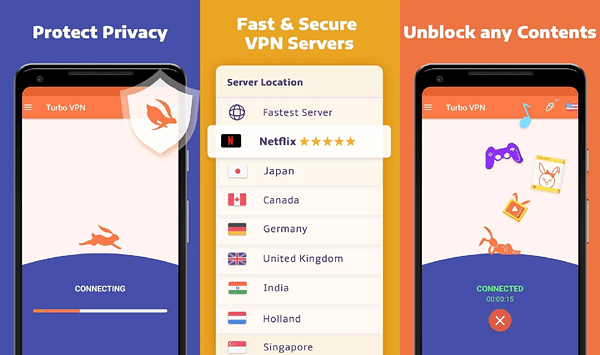 Touch VPN is one of the best free VPN apps and automatically connects to any public WiFi. It then converts the public WiFi into a secure Wifi for your usage. It’s provided by the Hotspot Shield and thus, is quite secure. The app is free to use and doesn’t come with any data limitations. Thus, you can browse unlimited data for as long as you want. It’s also secured with a strong SSL collection. It doesn’t collect any user data and is very fast to use. 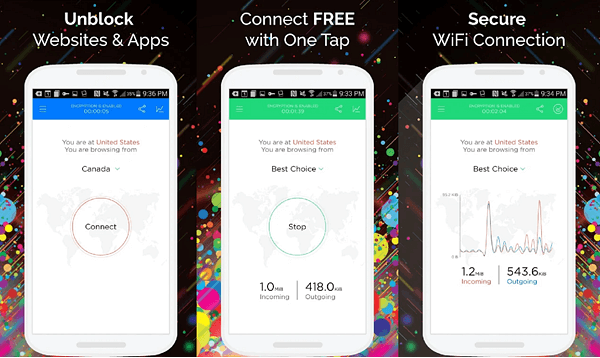 Betternet VPN provides unlimited data to its free version users as well. It connects to any public WiFi or network connection that doesn’t hamper the speed of your session. You don’t have to create an account to use this app and can start just with just one click. However, the free version of the app showcases a lot of ads. You can upgrade to the premium version to get rid of the ads on the app. 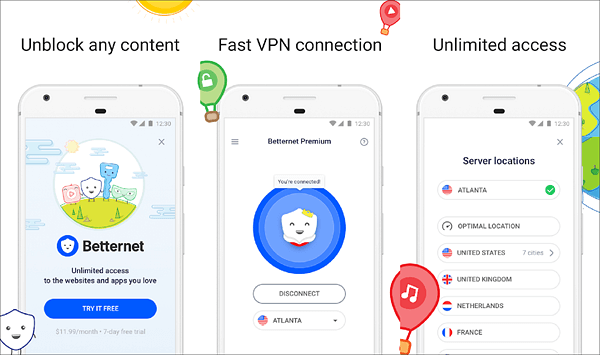 Which one is your favorite?

We read about some of the best free Android VPN apps of 2019. Most of these apps are also available for iOS devices and can work as browser extensions in Windows and Apple devices. Most of the free versions offer a limit on data bandwidth but don’t compromise on the security. The best app to provide unlimited data and a safe connection is ProtonVPN Free. However, Hotspot Shield is the best app in terms of security but offers slight data restrictions.

In the process of using your mobile phone, if your data is lost or deleted for some reason, you don’t need to panic, because there is a powerful Android data recovery software that can help you quickly find them back. Get it now!